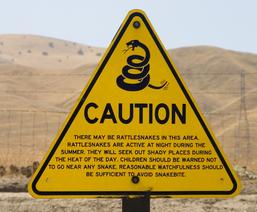 They're everywhere, just waiting like ticking, rattling bombs. Coiled in a live oak treetop, underneath the hood of the red Chevy ranch truck, on the other side of the screened back door,

​and perhaps even underneath our four poster bed. I could say, "No problem. They don't bother me. I grew up on a ranch and ate boot leather and nails for breakfast. My only toy was a rattler's tail. I walked twelve miles to school each morning, pushing a tractor with one hand and turning the pages of a Zane Grey novel with the other..." I could say all that, but it would be a lie.

Here's the truth. I'm very fearful of snakes. Just seeing those cheap plaster rattler ashtrays in Ruidoso, New Mexico, sometime back, made me shudder. Even if a rattler coils on an ANIMAL PLANET television show fifteen feet from where I'm sitting on my living room sofa, I feel as if I might need to lie down with a cold rag on my forehead.

​Several years ago, I went to see my folks on the family ranch that lies between Johnson City and Fredericksburg. The ranch has been in the family since the 1800's and is flanked by the Pedernales River, tons of limestone, Indian mounds, persimmon bushes, cedar and live oak, and seasonal bluebonnets. It also has rattlers, cottonmouths, a few jillion racers, chicken snakes, grass snakes and even occasional king snakes. There are sink holes and caves that I won't go near because...you guessed it, they serve as convention centers for vipers.

This spring day, I drove past the one-hundred-year-old fence that ran between my grandparents' house and my parents' pasture. I stopped to open the gate that kept the heifers and bull in the North pasture, and afterward saw the biggest, meanest looking rattler I had ever seen. It appeared to be crossing the road just ahead of me, so I quickly climbed back in my Tahoe. I put it into gear and charged, but not before I changed into a red cape--well at least in my mind. I had to save my family from a fate worse than death. Mighty Mouse to the rescue! I ran over the rattler, backed up and repeated the action at least fifty times. Finally, after fifteen minutes and five gallons of gas, I was satisfied it was dead.

"Take that--you serpent of the evil empire, you creature of doom. You are no match for Mighty Mouse!" These were tough words, but my knees were knocking. Shaking, I finally barreled on toward my parents' home. I ran inside the front door of the two story Walton's family-styled house and found my mother cooking venison sausage in the kitchen.
Hearing my footsteps, she turned around and initially smiled at me. My face read like a Stephen King novel causing hers to blanch. She must have wondered whether a family member had suddenly died, or worse, whether H.E.B. had gone out-of-business, or even worse whether a family member had died inside of H.E.B., causing it to go out-of-business.

"Oh my gosh, Mom. I just killed the biggest, meanest rattler I've ever seen!"
"Really?" she said. "Where was it?"
"On this side of the gate by the barn."
"Oh that...We killed that snake yesterday."