When our grandmother passed away, we found all sorts of treasures nestled in and around the Texas hill country home she’d shared with our grandfather for decades:  blue-eyed beauty marbles, rusted metal toy planes, plastic bead necklaces, and old thick glass bottles placed upside down over the yard fence to turn purple in the sun.  Her dog-eared Bible in a worn Ziploc bag was in her everyday black purse, and forty years of journals recording the price of feed and cattle and the effect of drought on crops were found in the bedroom.  They reminded us of what had been tucked in her heart and saved for all of us who would miss her.  Occasionally, she wrote about how she felt about things, but that is another story.

Depending upon the season, she would either go out to work in the garden after breakfast, before the sun became too hot to work under, clean house or help our grandfather doctor cattle, sheep and goats.  By eleven a.m., she’d be back in the kitchen frying up tender chicken pieces dredged in flour, using even the gizzards and necks, wasting nothing. Soon there’d be the anticipated platter of fried chicken, steaming bowls of creamed corn or new potatoes and peas, fresh peaches to spoon over icebox cookies, and a pitcher of iced tea placed on the kitchen table.  While they ate, they listened to the local radio announcer tell who’d been born or died, who had a combine to sell, the price of cattle and hogs, and what weather had been forecasted.  Mostly, they just liked to hear Paul Harvey tell, “The Rest of the Story.”

​What is Left Behind 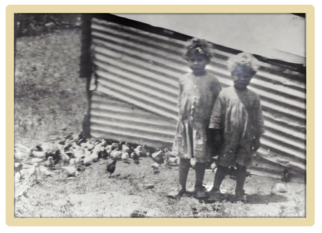 She used the bounty of her garden and the pecans that fell from the trees in the front yard to feed her family.   Her harvest included sacks of pecans, shelled or whole, fresh Beefmaster tomatoes, butternut squash, potatoes, corn, green beans, black-eyed peas, and peach, fig and plum preserves.  All these things she often shared with us when we came to visit. She was a gentle woman who gave love without measure, kept her sights on the eternal and believed in a higher meaning than the visual world.

Her daily routine was predictable as clockwork.  She would awaken and stuff logs in the old kitchen wood stove and the iron potbelly in the bedroom before anyone else stirred.  She’d get dressed in relative darkness and move again into the kitchen where she would run a comb through her hair, wash her face with Noxzema, gargle with Listerine, and sit down on the utility room step to put on her shoes.  Next she would pick up her milking bucket and head out to snub the cow in the shed.  Invariably, the cow would threaten to kick, but our grandmother would just say, “Settle down, sister,” and she would.  Milking done, she’d carry the bucket back into the kitchen, let the cream rise to the top, skim and save it, and put the milk into glass bottles.  Meanwhile, she’d also have started making biscuits, frying eggs and bacon in an iron skillet, and coffee bubbling in the old metal percolator. ​ 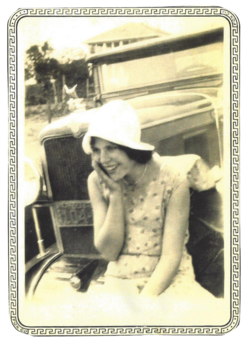 The next morning, after her death had been discovered, details handled and tears shed, family gathered in the living room.  There upon the fireplace hearth lay the squirrel, expired.  No one knew why or how this had happened, but possibly life for the squirrel just wasn’t worth living without his adversary. The battle was clearly a draw. Each had won nothing and yet everything. Perhaps it had been by grace that they had gone to gather their harvests together.

​After the dishes had been washed, naptime came for all in the household, no matter the age.  When we visited them, we would lie down wherever there was room, read the newspaper, look at pictures in the Montgomery Ward’s Catalogue, or just be still until we fell asleep.

Whether we were visiting or not, the afternoon schedule remained the same.  After our grandparents had awakened refreshed, they would tackle more chores or take a trip into town to get mail or supplies.  Most often, they’d climb into the ranch truck and rattle through the pasture checking on cattle, sheep and goats.  During the winter, hay and bags of cow cubes would be distributed from the back of the truck, which sometimes had been loaded by our grandmother.  Even at age eighty, she could throw fifty pound bags of feed to and from a vehicle.

Evenings were spent eating a simple meal–bowls of cereal with bananas, perhaps with spoonsful of black cherry Jell-O with fruit cocktail and Reddi-wip on the side, watching Walter Cronkite report the six o’clock news, and then afterward the Grand Ole’ Opry, Gunsmoke, The Ed Sullivan Show, or a John Wayne movie.  She shelled pecans while she watched television, which must have hurt her some due to the arthritis that plagued her hands.  Bedtime occurred after the end of the ten o’clock news.  Faces were washed and our grandparents slipped in-between white sheets underneath a chenille bedspread, and sometimes slept soundly, still as pieces of wood.

There were variations to these daily rhythms, of course.  Our grandmother took care of her mother-in-law, her bedridden sister-in-law, and her mother until their deaths.  Indeed in some way, she took care of the rest of us until her internal clock wound completely down.

No matter what tribulations had come her way, she had managed them all with grace.  There was a demon squirrel, however, who was like a giant fingernail scratching upon her spirit’s chalkboard. She witnessed him scampering away from her prized pecan trees with her treasured nuts.  Giving him fair warning, she told him to get away from her pecans, that they were to be left untouched for icebox cookies, fruit cakes and the Thanksgiving cornbread stuffing, or else…

That squirrel defiantly stuck a nut in his cheek and scampered away only to return twice as often as before.  After days of battle, our sweet grandmother went into the utility room, got her gun out of the rack, and accidentally shot a hole through the roof.  Now there were two reasons to settle the score, and she was riled.   She went outside, got him in her sights, took aim and missed the scampering target.  The squirrel won the day’s battle, and all she won was a dislocated shoulder when the gun kicked back hard.

The Hatfields and McCoys knew nothing about feuding compared to our grandmother’s war with that squirrel.  Daily, each side upped the ante.  Where the critter had stolen seven pecans and squirreled them in his nest the day before, he now stole ten.  Where she’d gotten the gun out once, she now got it repeatedly.  However, before she took aim, she’d needed to remove the sling the doctor had recently ordered her to wear.

Our grandmother developed a heart problem, just as had her mother before her.  She accurately predicted how she would pass away, recorded it in her journal, and even warned our grandfather that he might be prepared.  It was wintertime in the hill country.  Grass had turned brown and the pecan trees had shed their leaves. The squirrel was still stealing pecans, and our grandmother was hot on his trail.

On their sixty-third wedding anniversary, she prepared the evening meal for our grandfather just as she always had.  Next she washed her face, put on her nightgown and slipped into bed.  Like the squirrel, she made a nest of things to tuck under her pillow that might be needed during the winter’s night:  Mentholatum for her stuffy nose, white tissues and eighty-one years of dreams.  She settled down to sleep as usual, but varied from her routine in the wee hours of the morning.  Instead of getting up, putting logs in the stoves and milking the cow, she opened the gate into heaven’s garden and passed through it.